Live at the Vortex 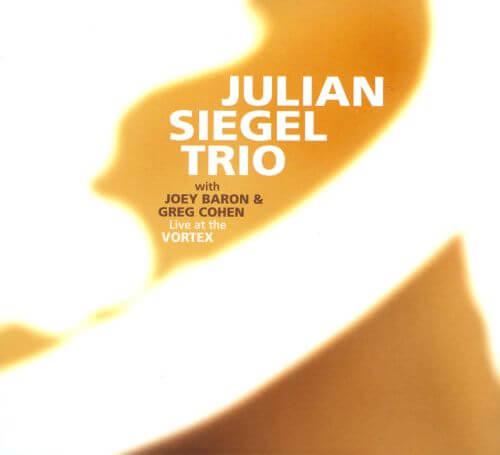 This CD is the long awaited live sessions recorded at the Vortex in London in January 2007 during a sell-out tour of the UK, which proved hugely popular with both audiences and press. The trio originally came together as a result of a major commission from the Cheltenham International Jazz Festival in 2006, but has developed into a real meeting of musical minds who enjoy each other’s company. Siegel and the ace downtown New York rhythm section of Greg Cohen (double bass) and Joey Baron (drums) create real fireworks and provide a perfect setting for fresh improvisations and great dialogue between the musicians, who between them share an impressive CV. The album will be released on Basho Records on 9th November 2008 as Basho’s first double CD – “Live at the Vortex”. To celebrate the release, the trio will tour the UK again in January 2009. Thanks are due to Jazz Services who have generously funded the project and to the Vortex Jazz Club who will be hosting the band for two nights to celebrate the launch.

Caught during a UK tour in 2007, this trio’s flexibility and mutual responsiveness are remarkable. Among the great characteristics shared by bassist Greg Cohen, drummer Joey Baron and leader Siegel (whose exceptional tenor, clarinet and bass clarinet do much for the group’s texture and colour) is a razor-sharp ability to pick up on found cues and ideas and take a performance in fresh directions in terms of mood, rhythm and how freely they handle the original material. Siegel’s originals and tenor have some of the quirky wit, imagination and authority of Sonny Rollins (although Lovano might be a closer influence), Baron’s musicality is stunning, and Cohen is brilliant. When they put their stamp, jointly and individually, on Siegel’s Atlantic , Haunted Waltz and the tour de force Sandpit , as well as Bacharach’s Alfie , it’s jazz at close to its inventive best.

This powerful international trio, led by UK reeds-player Siegel and featuring sometime Ornette Coleman bass partner Greg Cohen and New York downtown drummer Joey Baron, starts a UK tour next week. This double album (all Siegel originals apart from a radical remake of Alfie and a smokily bluesy One Mint Julep) was recorded at London's Vortex in January 2007. It triumphs in the tricky pursuit of making an unplugged horn-led trio sound varied (helped greatly by Siegel's rich resources on clarinets as well as tenor sax), and is a spectacular flyer for the upcoming gigs. Siegel's tenor inventiveness (reflecting, among many things, Coleman's dancing phrasing, the unflurried melody-building of Warne Marsh and the tonal range of Joe Lovano) is teased by Cohen's melodic twists and racing four-four pulse, and by Baron's fizzing cymbal-patterns and peremptory rimshots. The tunes are mostly strong (from Siegel's dark and rugged Atlantic to the captivating rhythm-shifting swinger Stop Go Man, the frisky MAB or the abstract Haunted Waltz), and the appetite for adventure of all three players means that almost every piece has an intriguingly evolving, spontaneous narrative.